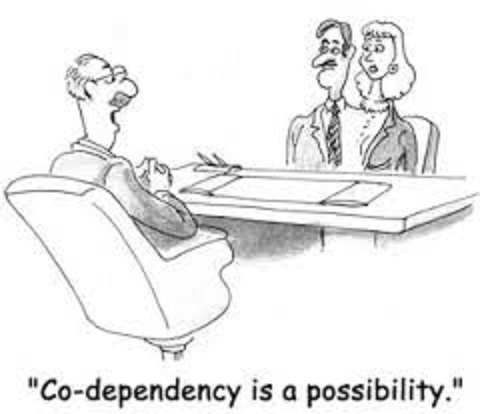 The narcissist, with all their personality flaws and toxic relationship practices, brings the traits of codependency into the relationship and through demands, projections and boundary transgressions, FORCE, EXPECT and elicit, codependent behavior from their partners.

The following traits exhibited while in a codependent and narcissistically abusive relationship are almost always present:

External frame of reference – Focus attention on what the narcissist is or isn’t doing.

Difficulty defining psychological and emotional boundaries. You don’t know where you leave off and the narcissist begins. You take on the problems of the narcissist.

You are likely a people pleaser who makes it your number one priority: Attempting to please the narcissist. You quickly become the doormat and Yes man to the narcissist’s demanding and needy personality.

You don’t trust your own judgment, perceptions and warning signals. You have a hard time expressing your feelings, needs and beliefs.

You bend over backwards making yourself indispensable to a narcissist. You knock yourself out doing things for the narcissist that they can do for themselves.

You become an unknowing martyr. You often learn to suffer gallantly and gracefully. You put up with intolerable treatment because you begin to think you have to. The narcissist insists that you also “deserve” it as well.

We  become out of touch with our own feelings. When we express genuine emotions to a narcissist they are wrestled from us. We LEARN to avoid such unpleasantry by denying what we genuinely feel, in favor of behaving the way the narcissist has trained us to behave.

We lose touch with our spiritual selves and worship of a higher power, because the narcissist steps into our lives, expecting to BE that higher power; there’s really no room left for anyone, including ourselves when we allow a narcissist to remain in our lives.

Black and white, negative thinking and internalized criticisms keep us spiraling downward in our own self esteem and worth.

Posted on January 2, 2014, in Narcissism. Bookmark the permalink. 76 Comments.