← Devaluation and the BIG discard – what is next? What do we do? How do we figure this out? How do we get closure? Where do we start? WHAT DO WE DO? A little insight into starting AND understanding our journey to recovery.
With this abuse, we must understand what we DON’T understand to move on and up to a level of recovery. We must also completely accept that they are what they are, they will NOT ever change, proceed forward with this NEW clarity and truth, do some damage control, seek good solutions, and return to the healthy life we deserve! →

Communication with a Narcissist is just dangerous because they abide by no rules or laws and the ONLY standards in their world are DOUBLE standards. 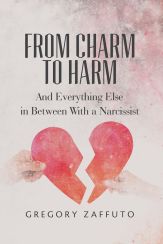 Communication with a Narcissist is just dangerous because they abide by no rules or laws and the ONLY standards in their world are DOUBLE standards.

From my Book – Greg Zaffuto – Author – From Charm to Harm and Everything else in Between with a Narcissist!

It is classic within the cycle of this abuse with all of the accusations from the Narcissistic partner AND having to identify with the constant blame, shame and punishment, that the target/victim TRIES to make sense of the Narcissist’s hurtful behaviors in an attempt to fix things, compensate, AND understand. But by constantly engaging with the Narcissist it becomes tangible or the victim’s new reality in a distorted and disabling manner because it is always reinforced by equal parts of pain and compassion (the love bombing) that keeps the victim trying to get back to that cohesive and loving part of the relationship they once knew! Add to this the frequent belittlement in the manner a Narcissist will dismiss anything that is exciting or that inspires a target/victim. A Narcissist will crush any attempts from the target/victim to make sense of their agenda and keep the target CONSTANTLY confused and walking on those eggshells or off balance or basically always being in control.

Any dissention from a target takes away from the Narcissist’s basic need to feel superior or the omnipotent one in any relationship AND most importantly getting that constant admiration that they need OR the ‘supply’ they are after. In reality the Narcissist has a pathological envy of everything real and normal in people, because it discounts the Narcissist’s reality or better yet lack of reality and makes them aware of their shortcomings of WHO they THINK they are. This is expressed in varying degrees throughout the devaluation, discard and horrific smear campaign where they will trample their target/victim’s integrity into the ground to support their superior facade. Anyone who has shared a life with a Narcissist recognizes the chronic dispensation of such double standards and the many manifestations across all areas of life where rules are applied. It is especially evident with children who have been raised by a Narcissistic parent or with this desperate and disabling love! If it wasn’t for DOUBLE STANDARDS a Narcissist would not have ANY standards at all.

As a consequence of this uncertainty is that consistent self-doubt and feeling of worthlessness that manifests itself in the target/victim’s heart and mind. The Narcissist is not only manipulating the mind but also the heartstrings of the target or victim to stay in control. If you do this I will love you, but it you don’t follow my exact rules and laws I will punish you, terrorize you demean and dehumanize you – not a very tangible approach to any sort of viable relationship.

This blend of abusive behavior and saintliness/martyrdom is very common with Narcissistic abuse because they are a tyrant which basically describes their need to control their environment. For the target/victim it is a toxic osmosis from the devaluation effect of being in the presence of and angry and spiritually draining creature. So, the Narcissist is not in this dance just for positive supply, we are a dumping ground for their toxicity as well and that is what damages the soul and destroys a person’s complete belief system. The Narcissist uses that manipulative and confusing component of equal parts pain and compassion in a manner to make their targets/victims feel it is coming from the Narcissist’s unconditional and loving soul. Unfortunately, that soul if it exists is neither loving nor unconditional. It is dark, empty and knows nothing about real love, truth or the reality of respecting life.

The most heartbreaking effect of these disorienting ‘double standards’ is the utter confusion about what is considered right and wrong when we are sharing a world with a Narcissist. The double standards seem to trade places constantly throughout the relationship. The Narcissist creates standards, morals and laws for everybody around them but they themselves do not respect or follow ANY of their own rules or standards. The result is the target/victim is ALWAYS confused or the one at fault and blamed for everything. A Narcissist will NEVER validate a positive reality or experience for another human being, but instead trap their targets/victims in a fun house maze of mirrors that never reflect an accurate image. The target/victim runs through that fun-house maze of mirrors seeing their reflection as different and ever changing or a static and inaccurate image that is ever-changing. Those who have lived through this know how this easily manipulates and implants itself into a deep-seated belief that one’s interpretation of reality, especially when reality is ambiguous or uncertain, is always the wrong one, the faulty one, the one fully invalidated by the mere existence of the Narcissist’s manipulative interpretation to control!

Never, never just listen to the Narcissists words, but instead observe the behavior that they back up any of the words they use. Behavior is how we can completely assess the reality of what a person is truly offering us. Words are a Narcissists main tools to make their con job functional and rewarding to themselves! You are worn out and sick because your psyche and body are telling you there is something terribly wrong when there is an illusion of everything being right (because he/she tells you so) and this is a very hard thing to accept. If it feels wrong, it is wrong.

What goes along with this is staying out of the Narcissist’s head! Don’t try to figure out what they are up to or what’s going on in their lives, what’s in their mind, or second guess them. Getting into a Narcissist’s head means trying to figure out their motives, trying to make excuses for them, trying to rationalize their behavior, maybe even trying to manipulate them, and all this does is gets you sucked right back into the content of the abuse again! They trained you well to always think about them, so that it deflects away from the truth that they are the problem, the sick one, and the abusive personality!

When you catch yourself thinking about them and trying to gain some relevant information that will help you out in some way, just remember NOTHING is relevant about them except that they lie, cheat, manipulate, steal, use, betray, backstab, brainwash, triangulate, extort lives away from people, and psychologically rape people’s minds. Just don’t try to figure out anything they do because the reason behind everything they do is ALWAYS self-serving. What in any of that do you want or need to understand — they are just dangerous to human life! If there really was real love, you would be together in a manner that there would not be so many issues and always having to explain yourself and feeling so traumatized.

For those who are in doubt of their relationship, read, absorb, and process the truths about Narcissistic behaviors – in other words get a strong education so you can align with the truth of this personality disorder. Keep in mind that toxic people can be mothers, fathers, siblings, coworkers, clergy and religious leaders, politicians, council members, teachers, and romantic partners. These people, for whatever reason, feel no remorse or empathy, and display no conscience in their interactions with other human beings. They use, abuse, and discard their source targets for a variety of reasons, be it sex, money, status, or a sense of power. There is no known “cure” for these people yet that is tried and true. There is no surgery, medication, therapy, religious epiphany, or philosophy that is going to alter these people. They are what they are and will remain that way – only their tactics change and evolve as each new source target is acquired. There is no reason to maintain any type of “relationship” with another human being whose only goal in their lifetime is to target and dismantle other human beings for their purposes – none. No/minimal contact ALWAYS! Greg

Posted on December 12, 2019, in Narcissism. Bookmark the permalink. Leave a comment.

← Devaluation and the BIG discard – what is next? What do we do? How do we figure this out? How do we get closure? Where do we start? WHAT DO WE DO? A little insight into starting AND understanding our journey to recovery.
With this abuse, we must understand what we DON’T understand to move on and up to a level of recovery. We must also completely accept that they are what they are, they will NOT ever change, proceed forward with this NEW clarity and truth, do some damage control, seek good solutions, and return to the healthy life we deserve! →