← There is NEVER stability with a Narcissist because there is not a real person or relationship there – but there is an agenda – and that is to make us a source of supply!
Narcissists are psychologically and emotionally abusive psycho bullies that inflict pain and extort normal/good people for ‘supply.’ →

Chaos, crazy making, and drama – a Narcissist’s recipe to always bake up drama to divide and conquer the world! 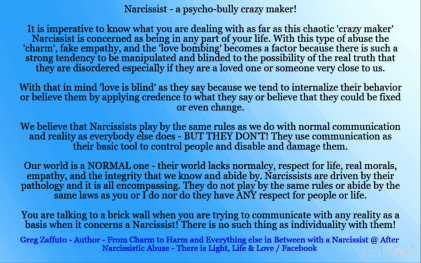 Chaos, crazy making, and drama – a Narcissist’s recipe to always bake up drama to divide and conquer the world!

From my Book – Greg Zaffuto – Author – From Charm to Harm and Everything else in Between with a Narcissist!

Narcissists love to create, seed and cultivate their toxic and chaotic drama for the basic reason of CONTROL! Yes, they are into drama and very dramatic because they live in and with so much internal chaos – even as controlled as they may seem to be. Narcissists also create drama as another distorted tool to get supply or draw all of the attention to THEM or also away from them when they need to avoid exposure. It is what they do with this drama because it never achieves anything good and it is used to basically divide and conquer people and keep them confused or to control AND to isolate them. You can bet the Narcissist is always the go to person or at the center of all chaos and drama but comes out smelling like a rose. The Narcissist I knew was very adept at this and cunning in the manner that they did it (triangulation) but be assured someone or something was being completely destroyed in the process! My Narcissist would always say that they were like a cat that would land on its feet and also come up smelling like that rose. I always thought that this was very odd to hear because it described a person that knew they did some awful things to people and got away with it and felt proud of the fact that they came out of it unscathed.

With a Narcissist life is a perpetual crisis because they are wounded so easily and life’s eternal victims. Everything is a perceived threat real or not – BUT they expect you to fix it NOW and on their delusional terms only. We all experience rough times, but a Narcissist has a natural inclination to make the good and bad into an ugly and chaotic situation or everything is a crisis situation where they go above and beyond what would be deemed as a normal reaction. Remember this too, when they want to really play their games they will even accuse you of things that have no basis of reality to create an argument and a crisis that YOU have to deal with – sort of their chaotic diversion tactic to throw you off base. Their energy will expand in YOUR mind because you basically respond to whatever the crisis situation is, and they will pull you into it to deplete your energy by making you respond to the situation or get you hyper involved and stuck in your head trying to use your normal resources to get to some cohesive conclusion where there is NONE.

This is how they condition you into becoming dependent on them and usually it is through their devious manipulation, threats and negative responses from the crisis they create – and they JUST MIGHT LEAVE YOU (or whatever threat) if you don’t change your ways. So, you are conditioned to always walk on those perpetual eggs shells and accept their behavior to basically keep the peace and avoid their punishment or rage or again control. They cannot really empathize, so empathy is not at the basis of any part of their interactions with people. Lies, deceit, manipulation, blaming, triangulation, conquering, and dividing people are. These actions ARE the basis of their ‘crazy making’ tactic or the real mechanics to their agenda as well as a dehumanizing ploy the Narcissist uses to manage people down. It is part of their plan to bring you down and keep you down or again CONTROL. They will also project their own personal chaos and downfalls onto you to free themselves of the shame that lives in them. They really know how to work a situation to get attention, create chaos, blame, and dump some personal shame onto their target! That is the reality of their life – they are human projection machines that have no reality except to source out their externalized needs or find supply.

Here is a big eye opener that you must truly internalize – they need you and your energy to be successful at maintaining their façade and achieving supply. They don’t want you to leave them until they want to go, so they go to great lengths to get and keep your attention until they have used you up as well as found another source of supply to replace you. Remember supply to them can be anything that gives them attention negative or positive so long as it supports that façade! I used to ask my Narcissist if I was so horrid WHY NOT LEAVE – but my Narcissist kept coming back with that little bit of love bombing, more lies and fake promises because they hadn’t found a replacement yet (well many side ones but none that stuck).

Like a toddler that hasn’t reached a level of emotional maturity, they consistently go from loving and supporting you to getting angry and detesting or hating you to get their needs fulfilled through their debilitating up and down chaos and tantrums but there is absolutely no love or bond there. They have their many toys and the shiniest one is the one that they sort of love for the time being until a newer toy catches their attention. Their moods and responses are inconsistent and dealing with them feels like you are walking through a field of landmines where at any moment you may step on one and it will detonate, but those emotions that bond you to them and your empathy keeps you hanging on. Well add to this the psychological abuse that manipulates and blinds your way and distorts your reality.

A Narcissist WILL try to please you, but the nice things they do always have a huge cost and a motive. They play the saint or martyr that keeps score, and just when you think everything is okay, BAM they get you one more time, and then one more and one more until there are so many levels of this chaos that you are lost/isolated within their debilitating pathology. Their modus operandi is to sabotage you while they look innocent. For instance, they will commit to doing something when they really don’t want to do it and then consistently bail out at the last minute. Or they’ll conveniently forget. Perhaps they’ll run late and miss an event or a timeline. Everyone has these experiences now and again, but Narcissists do this all the time and they want to turn it around and get you to feel guilty and upset about WHAT THEY ARE PURPOSELY doing to you. They will make up excuses with the most ambiguous details or justifications when it comes to accountability and then sulk and act like a victim if you get upset meanwhile they have betrayed you in some form or fashion that you aren’t aware of. They will conveniently lose items, forget dates, miss deadlines, ruin plans, and then become sad and withdrawn because they have tried so very hard when they have done nothing but be irresponsible, tricked you and then they blame you as not understanding, etc. This is just more of their crazy making and chaos! Add to this the outright lies, the cruel behavior, the betrayal, the raging temper and there you have it – a Narcissist that means to create chaos and crazy making to manage you down to nothingness.

It is important or better yet imperative to know what you are dealing with as far as this chaotic crazy maker is concerned because they are destructive psycho bullies! However, with this type of abuse AND because of the charm factor, and/or love that is also introduced into the factoring there is always the tendency to be a little blind to the possibility of the truth especially if the person is a loved one or someone very close to you. We actually end up taking that person’s behavior personally and applying credence to what they are saying, or possibly even believing that the crazy maker (abuser) in our life could change or we could help them. We also expect the crazy maker to play by the same rules with communication or apply normal etiquette as everyone else, but they don’t. Our world is a normal one, their world lacks the normality and integrity that we know and understand and is purely driven by their pathology. Crazy making Narcissists don’t play by the same rules as you and I. You’ll save yourself a lot of headaches and energy if you realize this now and stop trying to make the crazy maker in your life respond to your concerns because you are talking to a brick wall that you cannot penetrate!

So, it is important to internalize that the Narcissist delivers messages that are disguised as carefully and as proportionate as that disordered and fake mask they wear that conceals their false and negative self and their destructive agenda. They are negative messages disguised in a positive message or even a gesture. This inevitably sets you up to lose ALL THE TIME! All of this adds up to feeling a sense of worthlessness and everything you do seems to be inappropriate or wrong! There is only ONE way to end the madness and chaos – no/minimal contact! Greg

Posted on July 26, 2019, in Narcissism. Bookmark the permalink. Leave a comment.

← There is NEVER stability with a Narcissist because there is not a real person or relationship there – but there is an agenda – and that is to make us a source of supply!
Narcissists are psychologically and emotionally abusive psycho bullies that inflict pain and extort normal/good people for ‘supply.’ →